This centre of Javanese culture has old colonial charm, the best of Southeast Asian warmth and the wide streets and well-planned squares of a small European town. Crumbly old-Dutch buildings and the two keratons of Kasunan and Mangkunegaran dominate the old town, surrounded by quaint streets lined with small houses with proudly manicured gardens.

Why, such a lovely name for such a close-knit and affable town. Solo, previously known as 'Surakarta' was indeed, living by its namesake, until recently. A result, 99.9% of the population of Solo, a naturally halus or well-mannered people, are not only extremely friendly to visitors but also free of the 'hello mister' attitude that comes with big tourist traps. People in Solo love a visitor.

This is a town made for the open-air. Sit in a becak or hop on the back of an ojek or motorbike taxi, stop for nasi liwet at a small side-street or sing your heart out at one of the obscure karaoke shacks and bars, open until dawn. Though many places are open all night, Solo affectionately goes by the old moniker 'So-slow,' precisely what gives it such lovable appeal.

Triwindu Antiques Market
Nestled in a labyrinthian market selling ball-bearings and car parts, the gems at Triwindu antiques market, appear even more dramatic and blissfully cheap compared to anywhere in Bali or Jakarta. On the fringes, next to a small stall selling greasy knobs and bolts, sunlight streams through Morrocan ceiling lamps saturated with color. There are venetian mirrors and transistor radios. A stall sells reproduction antique, hefty stone Buddha heads and brushed brass ganeshas of all sizes, next to a small case containing three, silk 1930s clutch-purses with delicate crystal embellishment (except that now there are two). 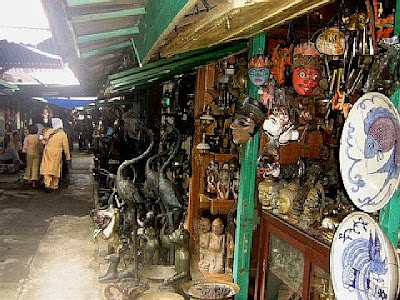 There are hip 1960s cocktail sets, straight from the pages of interior design magazines and about a tenth of the price of the same set in NYC or London. There are silver peacock-shaped door handles in painted wrought iron, gold vintage brooches and limestone elephants.

Because most of the goods from Triwindu are superior-quality, reproduction antiques and the rest genuine bric-a-brac from the last 60 years, prices are low. Sellers from all over come to Triwindu to sell their handiwork. It is worth a weekend trip to Solo just to furnish ones house with goods from Triwindu, or get a year's worth of gift-buying over in one morning. The sellers never harass and are open to bargaining.

Pasar Klewer
According to the tourism board, Pasar Klewer is the biggest batik and textile market in Indonesia. This may not be wholly true but it could possible be the friendliest. Ask to see a sarong and a podgy old lady will roll out the whole bunch and happily put them back when one walks away. Prices here are low. Expect to pay Rp 30.000 for a printed soft-cotton sarong or Rp 50.000 for a silk ready-made top. 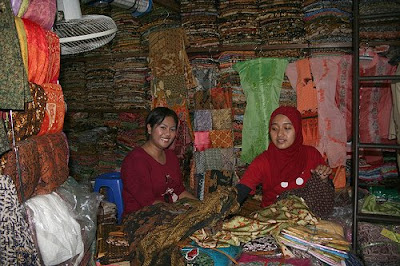 Pasar Klewer (Klewer market)
Keraton Kasunanan
Javanese culture, dance, and music permeate the lives of the timeless occupants of the palace, from the guards to the royal orchestra. there are few things to see here, save for a few random artefacts and a large canoe. The palace is far more haphazard than the smaller mangkunegaran. It's unconventional charm, however, calls for a romantic stroll with the sand in one's toes. Gamelan practice is from 9am - 2pm daily. 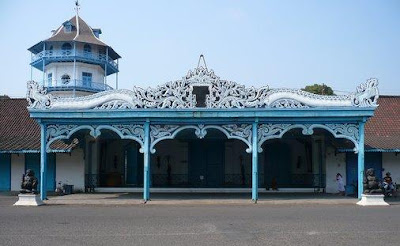 Keraton Kasunanan
Istana Mangkunegaran
Mangkunegaran is perhaps the more cosmopolitan of the two Karatons of Surakarta. Mangkunegaran shares close ties with political powers of the past few decades.

Istana Mangkunegaran
Around the time of the Chinese rebellion against the Dutch, Raden Mas Said, the first Mangkunegaran Sultan, born in 1725, persuaded the powers that be to stop the war by signing the Salatiga treaty, during which time he became a sultan. He was like his successors to date, entitled to have his own city square, establish a women's centre, sit upon the throne and raise a pair of sacred banyan trees.

Though modelled on a typical keraton with fortress walls and a ceiling with a fire motif (each color represents a positive attribute and brings peace to the palace) Mangkunegaran went through major architectural changes during the colonial period and exhibits European decorative features typical of the period. 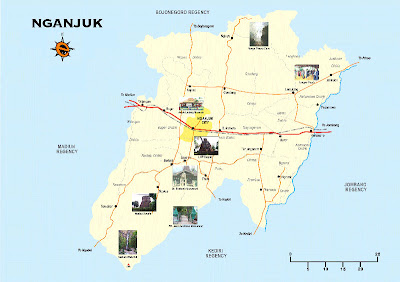 Nganjuk Map, East Java - Indonesia
Sedudo Waterfall is situated about 27 kilometers south of Nganjuk, located at the foot of Mount. Wilis, at Ngliman, Sawahan district. This location is often visited by many of people especially during Suro, one of the months in the Javanese year. 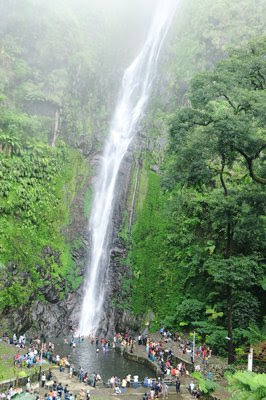 This ritual bathing ceremony dates back to the time of the Majapahit Kingdom in the 14th and 15th centuries. According to the juru kunci (key keeper) of the Sedudo waterfall, based on the legend story, Ki Ageng Ngaliman - who spread Islam in Nganjuk - was used to meditate in the area. To regard his retribution, the district government and the public around, always held a traditional ceremony every Suro (Muharam). Also according to popular belief, Sedudo Waterfall was used to bath statue in Parna Prahista ceremony then the water spattered to the body of the family in order to grant eternal youth and safety. 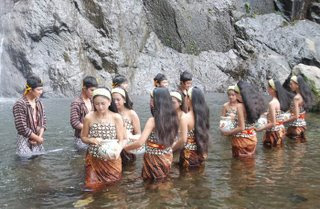 The form of The traditional ceremony of taking up Sedudo sacral water is begin with 5 (five) sacred women bringing klenting, traditional water jars, dressed in Java traditional clothes, walk slowly to the pool under Sedudo waterfall. The 5 sacred women is following by 10 women with longhair. The 15 women are called Putri Tirtosasi (Tirtosari Princess). Five boys, called Jejaka Taruna, also dressed in Java traditional clothes are waiting for them under the waterfall. The procession is accompanied with Jidor, traditional drum and Sekar Mijil song. After the Tertosari Princesses gave klenting to them, they will take the water from the waterfall which is believed have savour. Then the water will dedicate as sacrifice. 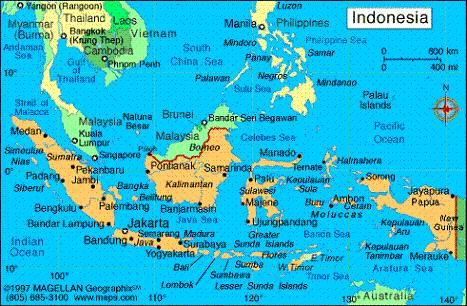